“I can see myself happy forever in this house.” 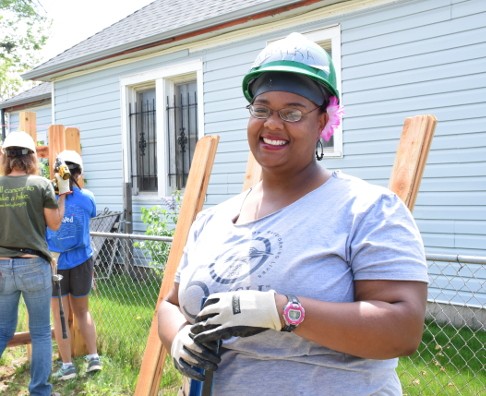 Tamika is the proud owner of a renovated home she purchased by partnering with Habitat for Humanity of Metro Denver. She works with a passion for her community, currently employed as a manager of the Pathways Program at the Jefferson County Action Center and previously served as a Peace Corps Volunteer.

Tamika has long valued the stability of homeownership. When she was 13, her family became homeless and struggled to find stable housing. She remembers moving from motel to motel “carrying all our worldly possessions in bags”, feeling insecure and unsafe. At a young age she realized that home ownership equates to “safety, stability, consistency, freedom, and hope.”

When Tamika applied to purchase a home with Habitat, she prequalified for a house that she fell in love with. Before making the big decision to become a Habitat homeowner, Tamika talked to a few of the neighbors and spent time getting to know her future neighborhood. She discovered one neighbor had worked as a Habitat volunteer on her house, as part of his sweat equity for the repairs done do his home through Habitat’s Home Repair Program.

That feeling of community among volunteers and Habitat homeowners resonates with Tamika. Shortly after partnering with Habitat, she reflected on the impact that owning a home will have on her life:

“My life will, and already has, changed so much just from being offered this incredible opportunity to be part of a program that is more like a community. I am thrilled at the thought of leaving work and having my own home to go to, my own space where I can make decisions and have the liberty to cook, clean, and live without permission or concern of distracting others. Moving into my own home will not be the end of my hoping and happiness, it is simply a new beginning.”

Thanks to the many Habitat supporters and volunteers who make affordable homeownership opportunities possible for hardworking individuals like Tamika.

Be a part of the Habitat community today!

Shop at our ReStore to find furniture and home improvement items at a discount while also supporting Habitat.
Find a ReStore

Join our community of volunteers who help carry out our programs in building homes, changing lives, and helping the community.
Sign Up Here

Learn how to purchase a Habitat home or apply for home repair.
Partner With Us

Help us build and repair homes, run our ReStores, and impact local families.
Sign Up Here